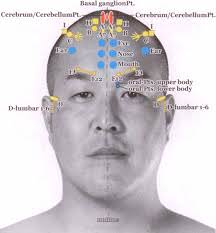 Ynsa, an easy and effective acupuncture system, a good tool for  therapist.

Let’s talk about what is Yamamoto’s Acupuncture YNSA -Craniopuncture- is a comprehensive system of acupuncture assessment, diagnosis and treatment, developed by Japanese physician Toshikatsu Yamamoto.
Like all acupuncture systems it works on the regulation and stimulation of Qi energy in organs and different parts of the body-yet it has some points that make it special,

YNSA was discovered in the 1960’s and was first presented to the world in 1973, at the Ryodoraku Congress in Osaka. Over the years, Dr. Yamamoto has not ceased to Yamamoto has not stopped working to improve and complete the system.
At the beginning of the 1970s, the method of acupuncture consisted of a single somatotopies or microsystem (correspondence between a point of the body area, with a specific area of the central nervous system, organ, muscle,  etc.) located on the forehead and with 5 basic points.

In all these years Dr. Yamamoto has discovered many more points, as well as other somatotopies not only in the head, but also in other parts of the body.
YNSA is, after auriculotherapy, the most widespread microsystem worldwide.

In traditional Japan, acupuncture was performed by masseurs, so the social recognition of this discipline was not very high.
.The population and the medical Japanese population and medical community have not recognized the effectiveness of this technique until recent years.

Dr. Yamamoto, in addition to being a gynecologist and surgeon, is an anesthesiologist.
This was very helpful when he started treating patients in his hometown of Nichinan. There were many people who, after many years of working in the rice paddies, had osteo-articular pain.
. He started practicing in a wooden hut, where he began to treat gynecology, internal medicine, obstetrics, surgery, and treatment of pain by nerve blocks, which are injections nerve blocks, which are injections of anesthetic drugs. On one occasion, Dr. Yamamoto injected mistakenly injected a peasant woman with only saline, without the procaine, the anesthetic component.
The next day, his patient returned to the office, stating that the pain had disappeared and that she wanted to have the anesthetic injected, that the pain had disappeared and that she wanted another injection to be sure that the joint pain would not return.
That same evening the Dr. went to a massage therapist who gave him an old book on acupuncture.
From then on, Dr. Yamamoto continued to give injections without anesthetic, also started using acupuncture needles.

This was the beginning of YNSA, now successfully practiced around the world by thousands of therapists and has helped hundreds of thousands of patients.
The wooden hut became too small, so, thanks to his brother, Dr. Yamamoto began building a hospital, where more than 2,000 surgeries were performed  under acupuncture anesthesia; appendectomies, deliveries, cesarean sections, hysterectomies, repairs of intestinal obstructions and amputations. Subsequently, the treatment of patients with hemiplegia began.

With the neck diagnostic technique, an association is generated between points on the neck, YPSILON points and YNSA, and the 12 cranial pairs.
In the YPSILON points, located in the temporal region of the skull, all the internal organs are located. They correspond to the ZANG FU, the TCM (Traditional Chinese Medicine) meridians of TCM (traditional Chinese medicine) and the internal organs according to the Western approach.
The system differentiates between the YIN somatotopies, in the anterior part of the skull, and the YANG somatotopies in the anterior part of the skull.

The application of the needles, as a general rule, is carried out ipsilaterally in the treatment of pain and muscular alterations, and contralateral and in the case of hemiplegia, although  this may be modified depending on the diagnosis.
The needles usually remain in place for 15-35 minutes or more. I personally have been combining YNSA with other types of acupuncture such as abdominal, Korean (hand) or zonal acupuncture .
Dr. Yamamoto is an exceptional human being, but very humble and grateful.

The system is very effective in the treatment of pain and in the treatment of many neurological pathologies, such as post-stroke sequelae. In addition, it has proven to be very effective in many other ailments such as hypoacusia or tinnitus, thanks to its powerful neuroplasticity capacity and utilizing the healing capabilities of the biophysical and biochemical systems of the body.

Do you want to learn?